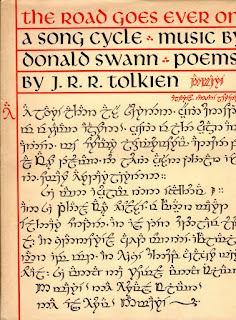 So here we are the end of all things -- well, not really, but we are at the end of our summer course. Later this year, I'm sure, many of us will see the extended edition of the first Hobbit film, which is promised just in time to help promote the non-extended theatrical release of the second film. The film goes ever on and on, it seems, and one can only imagine what might be added in, given the cornucopia of the existing 169-minute version. Flashbacks of the Old Took? Silly elvish songs welcoming the dwarves to Rivendell? Another turn of the troll rotisserie? A chance encounter with a ten-year-old Aragorn? The mind reels at the possibilities.

If the LOTR film experience is any guide, we'll be steeping ourselves in Hobbitism at least until Christmas of 2015, when the three-volume expanded film box set will be under our trees (or, by then, more likely just in our streaming queue). And whither then? I cannot say.
Posted by Russell Potter at 4:39 PM 2 comments:

The Speech of Dwarves, Men, and Orcs 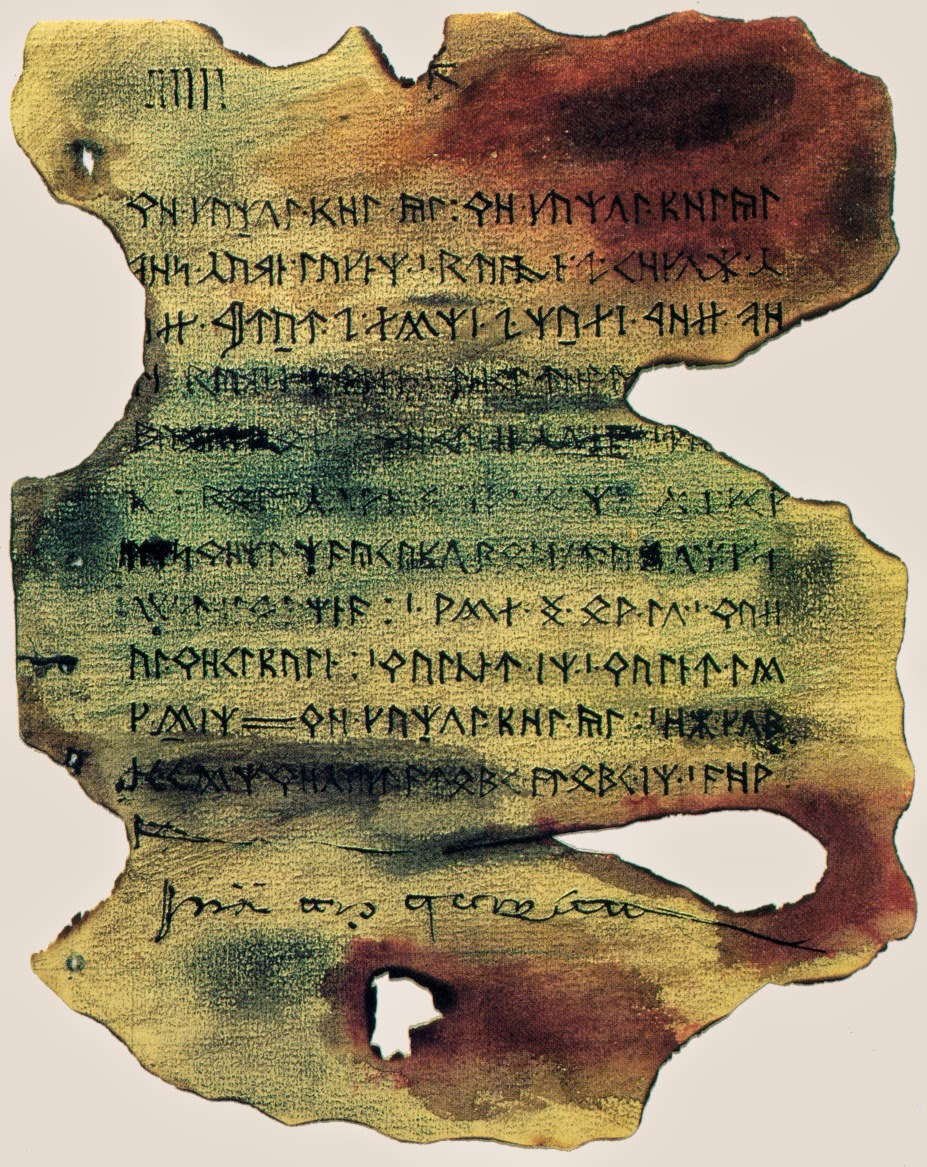 Tolkien's lesser languages, although less thoroughly worked-out, had much of the same symmetry and internal consistency as Elvish, and were each designed to reflect something of the character of its speakers. Dwarvish -- Khuzdul, to be precise -- had a great deal of guttural sounds, though also a rough dignity befitting a proud race; it seems most closely to resemble Hebrew. One curious aspect of Khuzdul was the the Dwarves were very reluctant to let outsiders learn it (though a few persistent Elves were permitted the essentials), and some aspects -- their own "true" Dwarvish names among them -- they kept secret; they were not even carved upon their own tombs.

The earliest languages of Men were rather less well worked-out, though eventually the speech of the Edain, those who most closely followed in Elvish footsteps, eventually evolved into Adûnaic, the language of the Númenorians. Although after the fall of that kingdom it was no longer used in its pure form, it became the basis for most later languages of Men, and of "Westron" (a Englishing of the original Adûni), the "common tongue" employed by Men, Hobbits, and (as a sort of lingua franca) Elves and Dwarves as well. The idea that the "better" human languages were those that learned or borrowed most from Elvish was also a persistent feature of Tolkien's worldview.

Last and (deliberately) least came the unnamed "Black Speech," devised by Sauron at some point in the Second Age, and intended by him to be used by all his servants. Many orcs, alas, lacked the ability to master it thoroughly (though it appeared in their names, and the names of their regiments and fortifications); it became primarily an incantatory speech for Sauron, the Nazgûl, and his chief lieutenants. More recently, Black Speech -- or an invented extension/form of it -- has become popular in the band names of so-called "Black Metal" groups such as Burzum, Za Frûmi, and Nazgûl. The exact origins of this speech are uncertain, though it appears it was made in a kind of abasement or mockery of Elvish, and like Elvish is a higly inflected language, to judge from the very few bits we have of it. Interestingly, this makes Sauron the only figure in Tolkien's subcreation to create his own language -- Fëanor and others only created alphabetic systems -- and suggests a strange new moral about the nature of invention and imitation.
Posted by Russell Potter at 6:35 PM 4 comments: 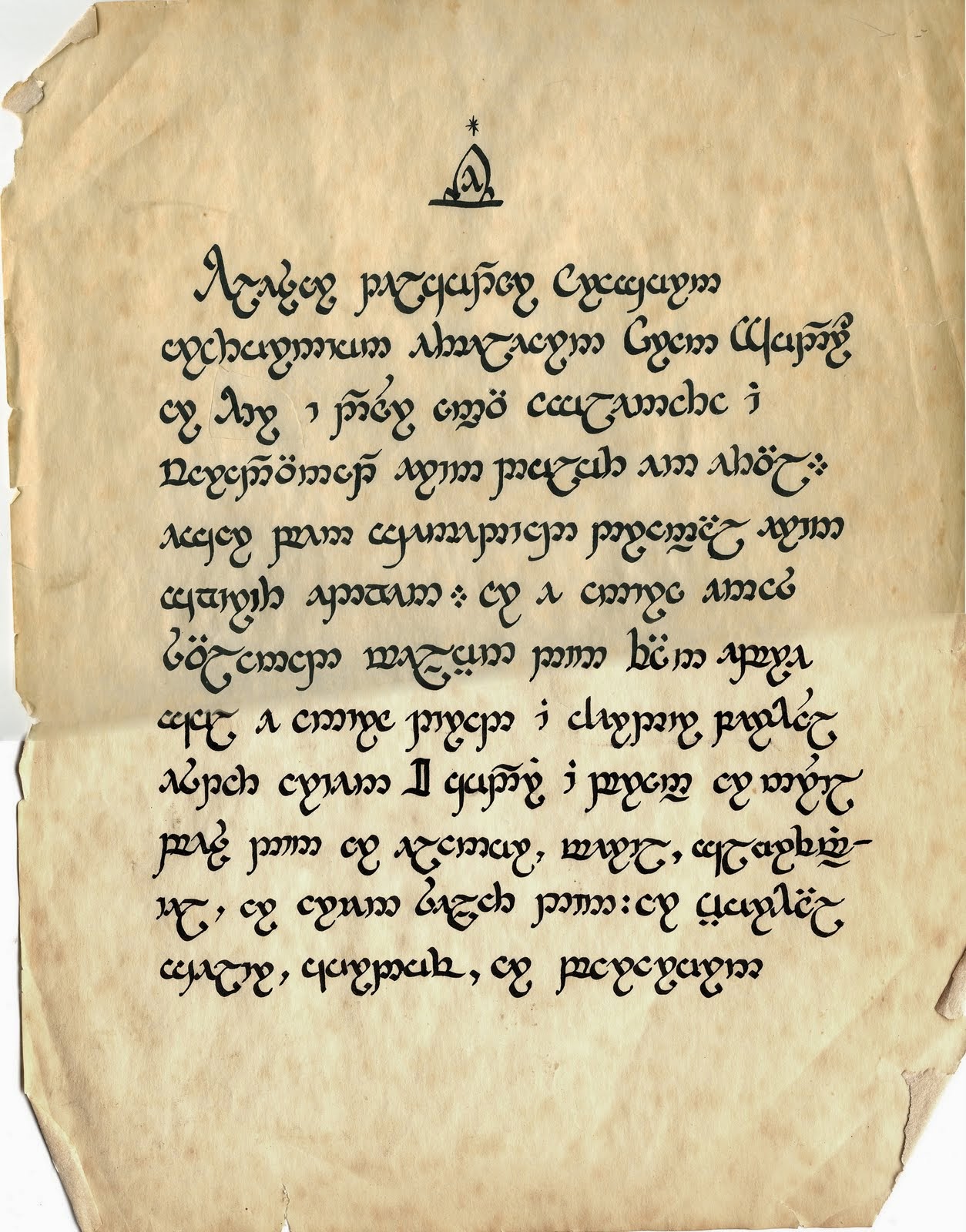 Once he had his languages, Tolkien sought to map out their historical relationships, beginning (philologist as he was) with a prototypical speech he at first called "Gnomish" (the Noldor were known as the "Gnomes" in his very early works). He then used what he knew of the principles of language change both to create and explain the relationship between this ancient Elvish, Quenya, and its more "worn down" relative "Sindarin." In doing so, he used well-known principles of historical language study, which suggested (for instance) that /v/ might "wear down" into /b/ and /k/ into /g/. Thus the Quenya "Valaröke" (spirit of fire) "wore down" into the Sindarin "Balrog." Eventually, he ran into issues which could only be explained by modifying the history of the Elves to explain the changes (or lack thereof). He knew that a population's speech, once separated from its main body, would begin to evolve differently, and thus difference required separation -- the Light Elves from various Dark Elves, the High from the Low, the Elves of Middle-Earth from those of Beleriand, and so forth.

The language of Men was always meant to have had a separate origin, though greatly influenced by the contact of the Edain with the Eldar. The more "noble" men spoke a speech with more Elvish influence, and borrowed many words from them. Early men spoke a language known as "Hadorian," which was the parent language of Adûnaic, the speech of Númenor. With the fall of that realm, the few Faithful brought their speech back into Middle-Earth, where it seems to have grown into a sort of "prestige dialect" of Gondor; the bulk of the rest of men spoke a distant tongue, which by late in the Third Age had become known as "Westron." Later in his career, Tolkien liked the conceit of having merely "translated" the works of Bilbo and Frodo out of Westron; he then rationalized the use of Old English to represent the speech of Rohan because the Rohirrim spoke an older form of Westron.

Not many examples, alas, of Westron, alas, are known; Tolkien principally talks about it in the Appendices to LOTR. The names of the Hobbits, for instance, are known; Frodo's actual name was Maura (the -a was a masculine ending in Westron names); Merry (Meriadoc) was Kalimac, with "Merry" representing the more familiar "Kali," and so forth.

The study of Tolkien's languages is now a field in and of itself, and has advanced greatly since Ruth S. Noel's little red book (which is now known to contain many errors). Linguists have had the advantage of access Tolkien's unpublished writings, including some which never even made it in the twelve volumes of the History of Middle-Earth. Some of their work is quite technical! But the fascination with invented speech is a key part of both Tolkien's and his fans' engagement, and the idea that it was speech -- language -- from which his world was wrought, provides a remarkable starting-point for the analysis of the worlds which resulted.

Note: The image at the top of this post is of a letter from Aragorn, after he had become king, announcing a visit to the edge of the Shire early in the Fourth Age. Tolkien made many facsimiles of this letter; this one I made myself back in 1979 after having copied one of these versions from his original manuscripts.
Posted by Russell Potter at 8:00 AM 6 comments: 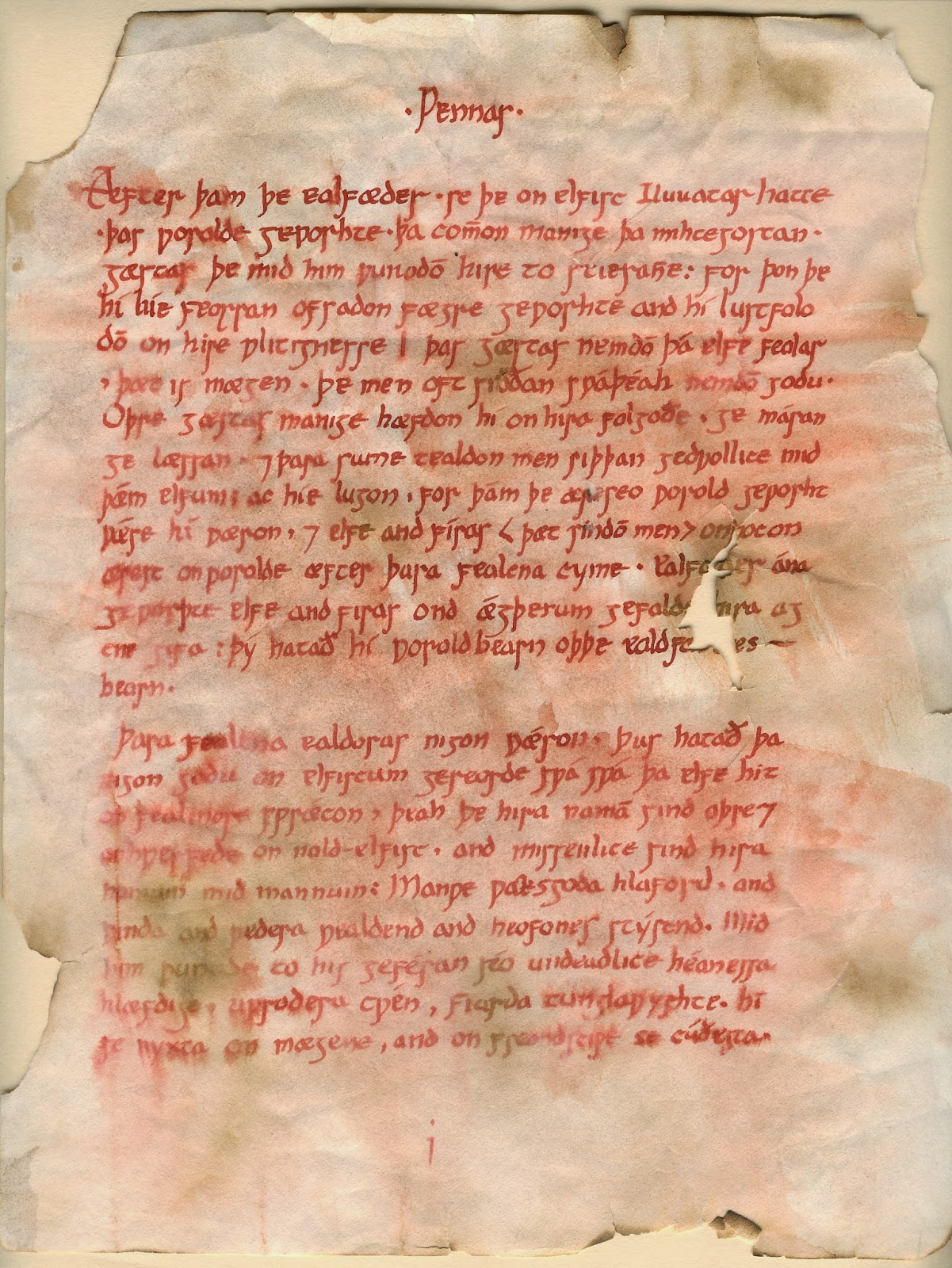 The land now known as England was originally inhabited by an unknown culture of people, sometimes referred to as "Megalithic" people (a reference to the standing stones they left at, among other places, Stonehenge).  These people were displaced by Celtic tribes, who in their turn were pushed back to the peripheries of the island by three Germanic tribes -- the Angles, the Saxons, and the Jutes -- who arrived in the fifth century to fill the power vacuum left by the departing Roman colonizers.  We know little of their culture, though, and nothing of their literature, until the moment when they were converted to Christianity -- and literacy -- a couple of centuries later. The former pagans became enthusiastic patrons of the Church, endowing monasteries where scribes, perhaps in an idle moment, thought to transcribe some of the ancient oral traditional verse that was still remembered -- and this we have Beowulf, along with a few other shorter poems and fragments -- The Fight at Finnsburh, Waldere, The Wife's Lament, and the riddles of the Exeter Book (several of which Tolkien used for the Riddle game in The Hobbit).

Tolkien's field of study was Anglo-Saxon, and so of course he was intimately connected with this tradition; his work on Beowulf -- particularly his essay "Beowulf the Monsters and the Critics" -- was highly influential. And the Saxon world exercised great influence on his own creations; indeed, at one point early on in his subcreation, the entire story of the Fall of Gondolin and the Elder Days was meant to be to narrated by one Ælfwine (Saxon for Elf-friend), and Tolkien back-translated much of his narrative into an "original" Old English version (the inspiration for my facetious ancient manuscript page above). In the finished work, the Anglo-Saxon speech was given to the men of Rohan, whose names and speech were all taken quite literally from the language. Éomer's salutation greeting Westu Theoden Hál is perfectly grammatical: Be thou healthy, Theoden! The idea was that the speech of Rohan, as an older dialect of the Hobbits' Westron, would sound vaguely familiar, and indeed it does.
Posted by Russell Potter at 10:33 AM 1 comment: